Coming from France where you have one hockey rink every 60 km, one adult rec team per rink… choosing a leisure hockey league isn’t really a headscratcher… There is only one… 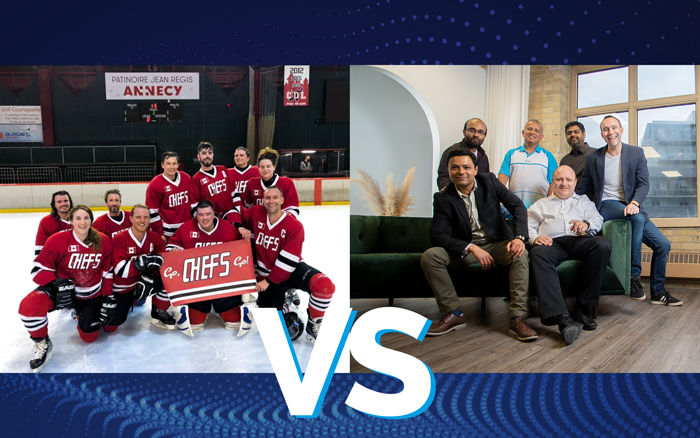 Once in Canada, it was a different story: So many leagues… So many calibers… So many choices…

I landed on a team called The Chefs. After one pretty mediocre season, the team manager stepped out and on his way out asked if anyone would like to take over…

A singular hand went up, mine.. and that moment marked the beginning of 8 years of team management. Here are the similarities I noticed in running The Chefs and running Exocet Technologies:

It takes time and effort to build team chemistry. After our first season, 90% of our team didn’t come back. Why? The team was created from scratch and there was no alchemy. The next season I learned from my mistakes, paid more attention in the recruiting department, interviewed the players on the phone, explained that I was looking for well-minded people more than skilled players. The turnover decreased slowly, season after season, and we crafted a solid core team.

Team culture is essential and I found it much harder to build this in Canada than in Europe. I’ve come to realize that in Canada, people tend to compartmentalize their lives: WORK | SPORT | FRIENDS | FAMILY. I took it upon myself to try and break some of these barriers and build a common culture.

It requires constant involvement. To keep things running smoothly, you must handle the annoying administrative and organizational details to make sure everyone is well and happy. I suggest avoiding micromanagement, people are grown up and know what to do, just make sure the roster is full and that people know where and when to go.

Get in touch with us and let’s talk about how we can help you make the most out of your business plan. contact@exocet.tech

Are you an experienced BRIM consultant with magic hands for SAP Convergent Invoicing (SAP CI)? Are you looking for joining a great team and a long-term project? Can you handle great benefits and vacations on top of great working atmosphere?

Recognized as a go-to partner for SAP BRIM implementation projects, we are urgently looking for a seasoned SAP CI expert, with at least 5 years of experience with Hybris Billing/SAP CI and at least 3 successful deployments of SAP CI, for a long-term mission as SAP CI consultant. The mission will be remote until the ongoing little annoying situation got better, then will be based in Toronto, either on our Toronto Upper-Beaches office or at customers’ location in GTA.

Send us your resume and info, we are looking forward hearing from you!

Recognized as a go-to partner for SAP BRIM implementation projects, we have regular openings for SOM, CC, CI-FICA or CM (Mediation Zone) consultants, in Canada and US. Send us your resume and info, and if you are a “BRIM rock star” we’ll be happy to add you in Exocet technology’s contractors roster.

Do you have a strong technical background and great communication skills? Are you looking not only for a co-op work term, but to start a career? Exocet technologies offers 2 positions of co-op developers which could lead to the opportunity to join the company as full time SAP BRIM consultants. During your co-op term(s), you will learn to work with the “SAP Billing and Revenue Innovation Management” solution, work on designing and setting-up a fully operational BRIM demonstrator, and develop your presentation, consulting and business skills.

You must be enrolled in an undergraduate degree majoring in relevant technology programs, such as Computer Science, Engineering, Information Technology Management, Computing, etc.

You are familiar with any of the following: Python, VBA C++, Java, SQL. You are curious, open and fun, hand have more to bring than your programming skills, we want to know more about you.